To give you an idea of what the racecars look like, here’s a photo of the University of Hawaii and University of California, San Diego AI racing team with their IAC racecar. The car is sponsored by GAIA Platform and Eclipse Foundation member, ADLINK Technology. 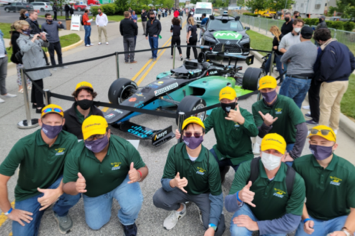 Racecars That Are Really Fast Robots

Prior to the IAC, universities, open source foundations, and enterprises collaborate to develop base software that’s shared with all IAC teams. The software gives each team the same reference implementation that “just works” and enables the IAC racecar to complete yellow flag laps with no additional development.

To differentiate themselves and ultimately win the race, each university team focuses on unique aspects such as vehicle dynamics, race strategy, and algorithms they believe will allow them to outpace other entries.

Despite its name, ROS is neither a robot nor an operating system. It’s an open source framework and tools for developing robotics applications. ROS 2 is the second generation of ROS, and it leverages advances made during the previous decade of open source robotics. ROS and ROS 2 are the standard for how robotics is taught at universities worldwide.

The Open Robotics community has contributed improvements that directly help these IAC university teams. For example, extremely fast “rosbag2” logging of camera and LiDAR sensor data was developed by Robotec.ai in collaboration with Apex.AI, ADLINK Technology, Bosch, and Tier IV.

The Autoware Foundation provides the autonomous driving packages for ROS 2.

The Autoware Foundation’s technical steering committee (TSC) and board of directors made autonomous racing a committed workstream to support the IAC and F1TENTH, an international community that designed and maintains the F1TENTH Autonomous Vehicle System.

The foundation created a Racing Operational Design Domain (ODD) working group, and the foundation’s software architect, Josh Whitley, has been helping Clemson University, and other IAC teams, develop IAC racecar shakedown tests since the fall of 2020.

The final IAC race is October 23, and everyone is invited to watch. The race will be livestreamed, and it’s free to attend in person at the Indianapolis Motor Speedway.

In the meantime, to learn more: