IoT adoption is dramatically increasing in many different domains, contributing to fast digitalization in several sectors. Modern IoT applications must deal with multiple issues, including monitoring, control, and management of the complex infrastructure and systems deployed by smart cities and smart factories to support critical services. As a result, IoT-based applications are becoming more and more complex to design, manage, and maintain.

The BRAIN-IoT research project focused on simplifying this complexity. The project resulted in the BRAIN-IoT Platform, a meta operating system for implementing and executing decentralized IoT applications with computing capacity at the edge in a computing continuum with the cloud. The platform reduces the effort required to develop, validate, operate, monitor, and manage IoT systems that orchestrate new and legacy devices and services.

BRAIN-IoT simplifies and automates several management procedures to make life easier for IoT systems developers and operators. These capabilities are possible thanks to a model-driven methodology that enables fast design and development of distributed orchestrating logics, and artificial intelligence (AI), which enables implementation of cognitive capabilities that can learn and make decisions at the right time.

With this approach, BRAIN-IoT addresses two of the main challenges that arise in current IoT scenarios:

In the BRAIN-IoT project, two main usage scenarios were taken into account:

The goal of the BRAIN-IoT Platform implementation is to drive digital transformation towards a smart world, exploiting data and computational processes from field devices, sensors, actuators, and cyber-physical systems (CPSs), as well as computing edge nodes and servers. 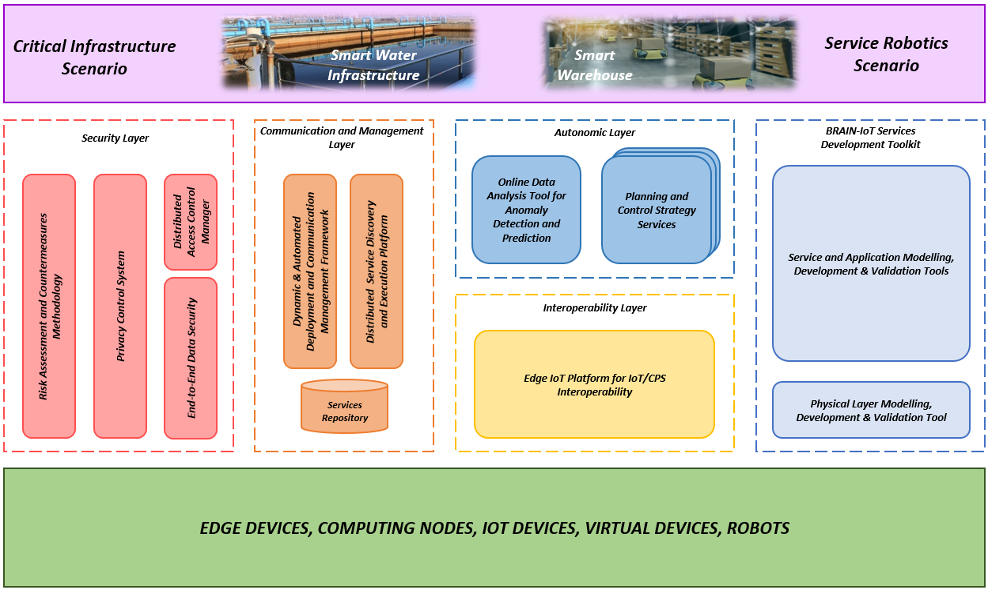 The modeling and validation framework for reusable smart behaviors is responsible for design, development, and validation of IoT application logic. The framework composes and orchestrates services provided by available devices, such as sensors, actuators, CPSs, and external services, such as third-party platforms and databases. Service and application layer modeling and physical layer modeling are handled by the BRAIN-IoT services development toolkit.

To meet the specific requirements of IoT developers using the BRAIN-IoT Platform, the BIP language can also be adopted, along with its toolset, the BIP code generator, and BIP modeling and validation tool, which were developed as part of the project. The BIP language describes composition of heterogeneous components, ensuring correctness-by-construction for essential system properties, such as mutual exclusion, deadlock freedom, and others. It also enables formal verification.

At the physical level, executable models representing real IoT devices can be developed using the BRAIN-IoT physical layer modeling methodology, which leverages the state-of-the-art SystemC-TML language. These IoT device models allow developers to replicate physical devices and to test and validate the developed applications and services in a safe, simulated environment before they are executed in a production environment.

As another way to support the system validation, the BRAIN-IoT modeling tool provides the ability to use development-time models to monitor the status of the modeled application that is running. This is possible due to the implementation of the Models@Runtime paradigm, which allows the application model to be synchronized with the running system.

The BRAIN-IoT models, which are converted into source code by the code generators in the BRAIN-IoT services development toolkit, are then released and stored in the BRAIN-IoT repository, ready to be deployed and executed by the distributed service discovery and execution platform.

The online data analysis tool for anomaly detection and prediction is a structural and fundamental service in the BRAIN-IoT Platform. Its role is to enable the autonomic capabilities in the BRAIN-IoT distributed service discovery and execution platform. This tool, which was developed using AI and machine learning (ML) algorithms, consists of a non-use-case-specific service that detects and sends notifications when anomalies in analyzed data have occurred or may occur.

These notifications are used by the execution platform, and by other planning and control strategy services, to trigger a prompt reaction that mitigates or avoids negative consequences to the IoT/CPS systems the BRAIN-IoT Platform helps manage. The BRAIN-IoT Platform component that provides the online data analysis tool for anomaly detection and prediction functionality is called s0nar.

The BRAIN-IoT distributed service recovery and execution platform is the architectural component that enables bulk deployment of BRAIN-IoT services on a mixed cloud-edge environment and puts them in communication with one another to implement the modeled application. It is based on the Paremus Service Fabric. This commercial product is an execution environment for deployable BRAIN-IoT services that has been extended with innovative functionality that enables dynamic and automated deployment and communications management. These capabilities, which were implemented using the new BRAIN-IoT fabric, combine with the Paremus Service Fabric to enable:

Part of the BRAIN-IoT distributed service recovery and execution platform also functions as the edge IoT platform for IoT/CPS interoperability. This platform handles interoperability with the heterogeneous world of IoT devices, CPS (real or virtual), legacy, and external systems that comprise the infrastructures to be monitored and controlled.

While sensiNact-enabled edge nodes are based on the well-established and mature Eclipse sensiNact gateway, which can be deployed in a distributed and bulk manner thanks to integration with the other BRAIN-IoT Platform components, the WoT-enabled edge nodes are a new implementation of the standardized WoT Servient binding layer. The WoT-enabled edge node implements an approach for automatically generating the interoperability layer for communicating with devices or systems based on a W3C WoT Thing Description of the communications interface.

The BRAIN-IoT security framework primarily provides access control and end-to-end data security functionality for resource-constrained devices and implements an approach for privacy control in distributed IoT environments that’s based on the concept of sticky policies.

A security module and gateway, a message integrity service (MIS), and a distributed authentication, authorization, and accounting (AAA) server have been implemented to ensure data confidentiality, integrity, availability, and authentication for the BRAIN-IoT Platform:

The privacy control system is a framework that allows IoT system end users to control privacy policies related to personal data collected using IoT devices. The solution is based on a policy enforcement point (PEP) that applies the policies and controls access to the data by available services.

The privacy control system attaches the policies to the data event and delivers it along with the data over the EventBus. The services that subscribe to that data type must be authorized by a trust authority before the EventBus allows it to receive the data. This authorization is provided by a policy decision point, which compares the policy attached to the data to the one declared by the service. If the policies are compatible, the privacy control system authorizes the EventBus to deliver the data event to the service that requires it.

Finally, the attack defense strategies exploration tool is a decision-support tool that uses a type of cost/benefit analysis to provide suggestions about the most relevant countermeasures to implement. The tool aims to identify the attack actions that are most likely to succeed and the best defense actions to make the system more difficult to attack.

There are many good reasons to adopt the BRAIN-IoT Platform, but here are the top five:

Most of the BRAIN-IoT Platform components have been released as open source and are available in the Eclipse Research Lab.

This project receives funding from the European Union’s Horizon 2020 Framework Programme for Research and Innovation under grant agreement no 780089. Enrico Ferrera leads the Distributed Intelligence and Secure Services Research Team at the LINKS Foundation in Turin, Italy. He works primarily in the areas of systems interoperability, IoT platforms, and distributed intelligent systems, and is currently focused on projects related to autonomous systems, cyber-physical systems, and IoT with applications in home automation, smart cities, Industry 4.0, and service robotics. Enrico also participates in several European research projects, and is the coordinator of the BRAIN-IoT research project.

Sebastian Scholze describes how the SmartCLIDE research project aims to bridge the gap between on-demand business strategies and the lack of qualified software professionals with a new cloud native IDE.

After successful completion of the PDP4E research project, project participants believe the next logical step is to create an Eclipse Foundation working group that focuses on open privacy protection models.