After a lot of hard work, Jakarta EE 10 was finally released on September 22, 2022. This not only marked a great milestone for the Jakarta EE community but was proof that Jakarta EE was able to move forward under the governance of the Eclipse Foundation.

When Java EE was moved to the Eclipse Foundation in September 2017, a massive effort got underway to address the IP and copyright transfer, which culminated in Jakarta EE 9/9.1. This release laid a stable foundation for the specifications, rebranded the project, and renamed the namespace from javax to jakarta. However, end users had not benefited from any additional functionalities since Java EE’s release in 2016.

But that stable foundation made it possible to provide end users with many feature updates in Jakarta EE 10. This article briefly outlines some of the updates and demonstrates how to use Open Liberty to access the implementations of Jakarta EE 10.

Jakarta EE 10 introduces a new profile, called Core Profile, which was created to be used by MicroProfile. Core Profile also highlights the specs most relevant to cloud-native applications and can be used by new runtimes to embrace Jakarta EE technologies. 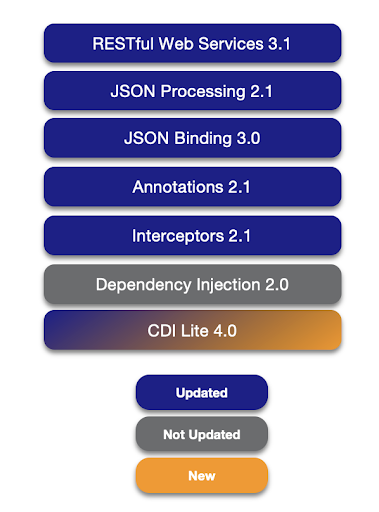 The Jakarta RESTful Web Services 3.1 specification provides Multipart as a media type. Multipart was widely supported by a number of languages and even Java libraries including Open Liberty, via internal IMultipartBody and IAttachment APIs. However,there was not a standard for multipart support in Jakarta EE before this release, with the introduction of the, spec defined, EntityPart API.

We are looking at how to use this feature from both the producer and consumer perspective. Below are the snippets that demonstrate how to produce a Multipart.

This code snippet demonstrates how to produce a list of EntityPart, which might be in multiple files:

When receiving the Multipart info, you can use one of the two formats to consume the information:

You can also use this snippet:

The CDI Lite section supports build time compilation so that the runtimes that use GraalVM can still take advantage of the rich injection framework provided by CDI Lite.

JSON-P also added some interface for primitives, lists, and objects:

Significant Changes Made to JSON-B 3.0

The JSON-B specification underwent multiple changes, and though it operates on the top of JSON-P, some of those changes are backwards-incompatible. Changes include:

There were also a few minor updates made to the Jakarta Common Annotations specification:

Jakarta Interceptor has only had a minor update, due to the update of the dependency of Jakarta Common Annotations 2.1.

If you want to try out the Jakarta EE 10 Core Profile, you can use the latest Open Liberty beta to give it a go. Read this blog to learn how.

Open Liberty is the first certified implementation for Jakarta EE 10 Core Profile after this Core Profile was released. In your application, you can specify the following in your pom.xml if you use Maven:

If you use Gradle, you can specify the following dependencies:

With either of the above dependencies specified, you can use any APIs included in the Jakarta EE 10 Core Profile Open Liberty 22.0.0.9-beta.

If you are using MicroProfile APIs, don’t worry. The release of MicroProfile 6.0 in 4Q 2022 will align with Jakarta EE 10 Core Profile. Open Liberty is currently the driving force towards this release. 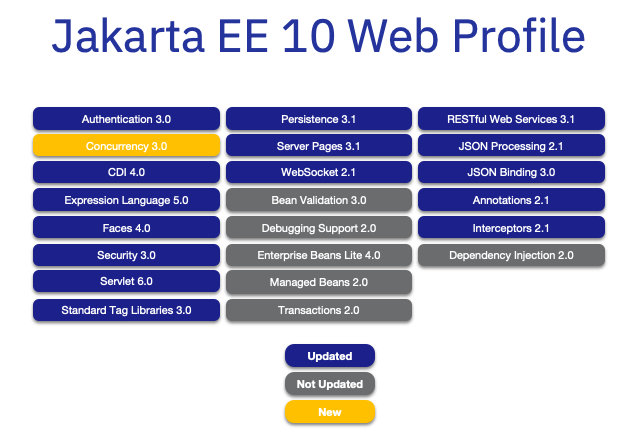 Prior to Jakarta EE 10, Jakarta Concurrency was not in the Web Profile release. It was only available in the Platform release. Due to its popularity, it was adopted by Jakarta EE 10 Web Profile.

In the above code snippet, the annotation @ContextServiceDefinition is used to define the Context Service and its policy on which contexts are to be propagated or cleared. In this example, all contexts except APPLICATION are to be cleared when executing methods using a new thread.

In addition to Jakarta Concurrency 3.0, CDI 4.0 introduces several changes, some of which are backwards-incompatible. 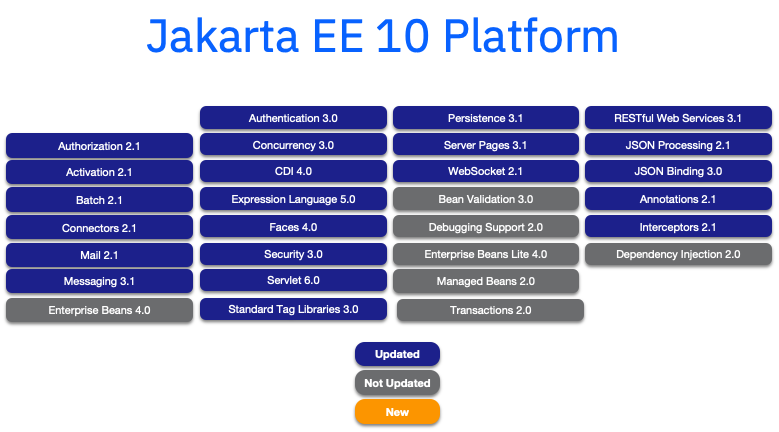 If you’d like to learn more about Jakarta EE 10, please visit the Jakarta EE Specifications Page. If you enjoyed this article and have comments or questions, feel free to connect with me via my LinkedIn or Twitter profile. Emily Jiang is an architecture council appointee, and a project lead and committer to many Jakarta projects, including Jakarta Config, Contexts and Dependency Injection, Data, and Interceptors.

Steve Millidge explains the process behind Jakarta EE 11's development, and why there is already a lot to get excited about.

Ladislav Thon is a principal software engineer at Red Hat Inc. and a committer to the Jakarta Context and Dependency Injection and MicroProfile projects.