Google’s recent announcement that it will be retiring its IoT Core Service next year underscores the importance of the Eclipse IoT Working Group’s mission to build and promote the software, standards, and collaboration models needed for an open Internet of Things architecture.

More than ever, the graduated and active Eclipse Ditto project is supporting this mission. Our most recent effort in this direction is our collaboration with the World Wide Web Consortium (W3C) to incorporate the W3C Web of Things (WoT) standard.

To understand where Eclipse Ditto fits into this context, an explanation about what Ditto is and how it works is needed.

Eclipse Ditto is a framework that helps users build digital twins for both physical devices and virtual things. It takes the role of an IoT middleware that abstracts access to IoT devices via APIs. It also acts as an integration platform for other applications, providing features such as notifications of changes on the persisted state of the twins (Figure 1).

Figure 1: Eclipse Ditto as an IoT Middleware and Integration Platform 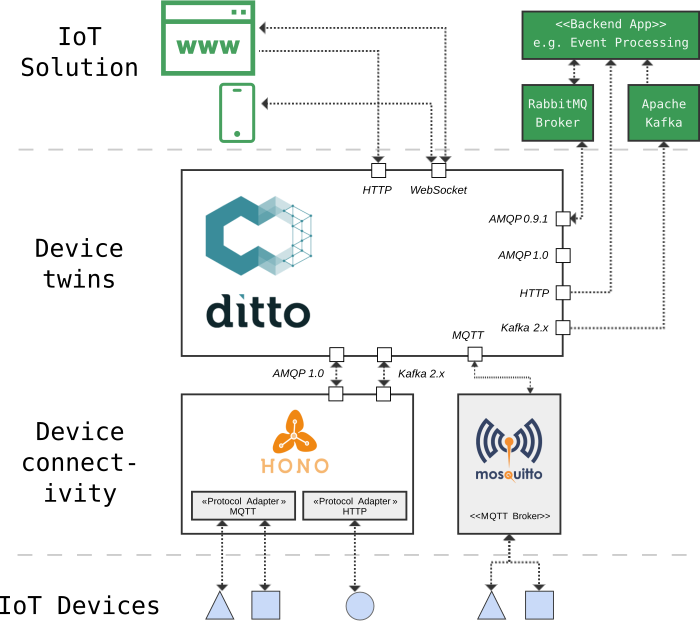 The fact that a central piece of Eclipse Ditto runs in the cloud means it solves some common problems of IoT solutions:

Ditto Only Requires Kubernetes and a MongoDB Instance

Consequently, Ditto only requires a Kubernetes and a MongoDB provider, or a self-managed provider. Devices can also be connected with a variety of connectivity protocols. For example, the Eclipse Hono project can be used as a device communication layer, abstracting on various IoT protocols. Or, devices connected to a MQTT broker can be integrated. These communication protocols are either standards or de-facto standards and are supported by most public cloud offerings.

The most recent addition to Eclipse Ditto is the W3C Web of Things (WoT) integration. WoT defines a standard for describing the capabilities of things and how to interact with them over the web, using existing, standardized web technologies, like JSON-LD, HTTP, or JsonSchema.

The integration of WoT into Eclipse Ditto provides users with a standard-based way to build truly interoperable IoT solutions. This is because WoT does not define a new protocol or payload that devices must adhere to, but describes via a Thing Description (TD) the existing capabilities and data formats of devices as things. 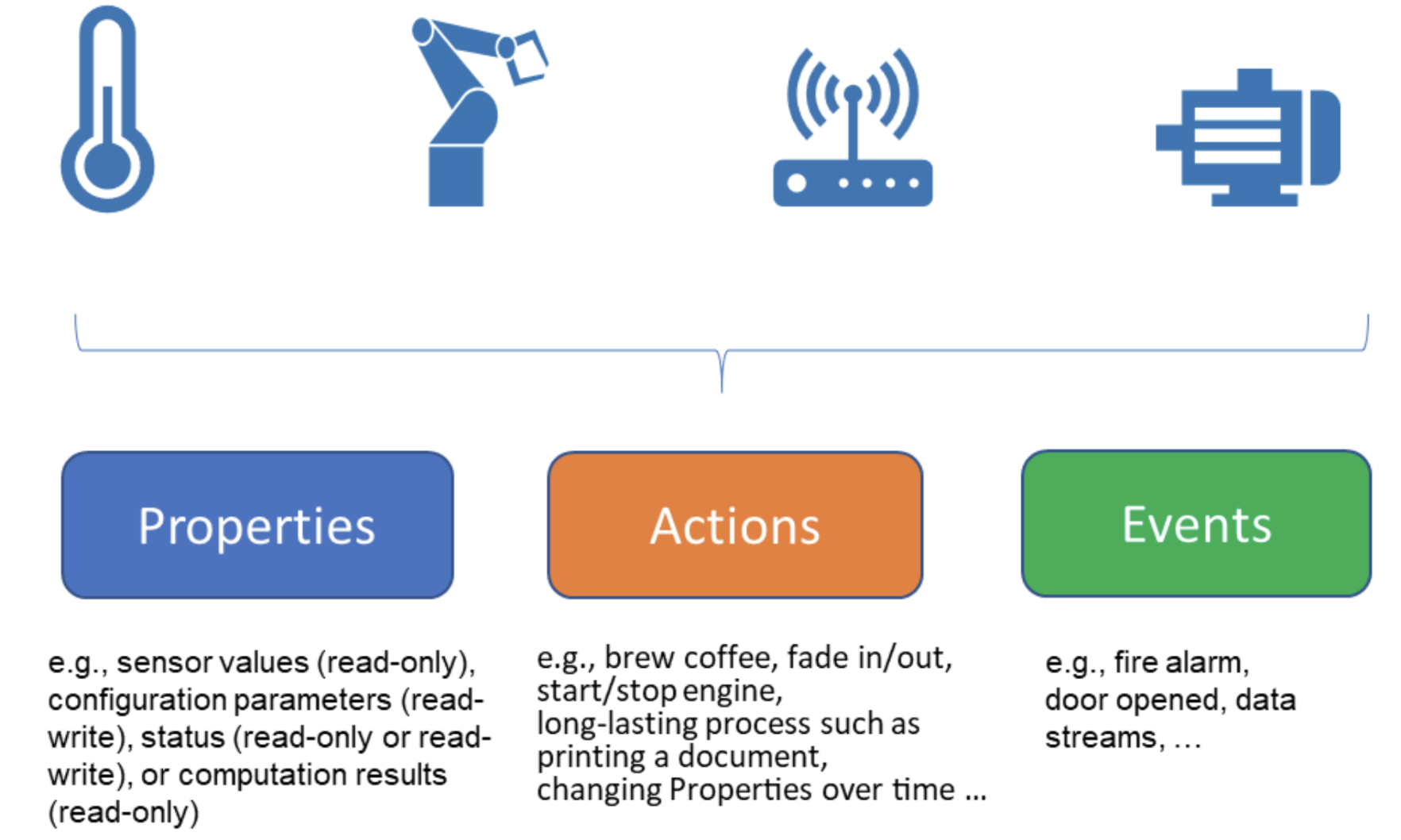 This intermediary role is where Eclipse Ditto can really shine. As a framework for providing APIs for twins, its interpretation of the digital twin approach already uses this proxy-for-devices pattern and can also provide Thing Descriptions for managed things.

The current Thing Description standard in v1.1 is in its finalization stage and includes the missing piece Ditto requires to provide this intermediary approach.

Version 1.1 introduces the concept of Thing Models (TMs) that can describe aspects or even complete device types on a model level, declaring which properties they contain, which actions can be invoked, and which events are emitted by concrete devices implementing a TM. These can be seen as a template for Thing Definitions, which inherently lack concrete security instructions for how to authenticate, as well the forms that provide concrete API endpoints to invoke for a single instance.

When creating new twins in Eclipse Ditto, they may link to a WoT Thing Model in their definition. That will create a skeleton JSON according to the properties which are defined in the model. The integration also enables Ditto to generate and provide the TDs via an HTTP request for each managed twin instance.

A consumer relying on the WoT Thing Description standard can then interact with the thing via Ditto’s HTTP API in the described way. In this way, Ditto and WoT together enable a highly interoperable IoT architecture.

Check out our documentation to find out more about the WoT integration and examples.

Like all Eclipse projects, we rely on continued involvement and engagement to improve our offerings. If your company is using Eclipse Ditto, consider adding your name to our list of known adopters: this is a helpful way for us to gauge the success of our project.

And if you’re considering getting involved, check out our documentation. You can also:

Join Us at Hacker Day Thomas Jäckle is a committer and the project lead of the Eclipse Ditto project which was created in 2017. As a senior expert for IoT and lead software developer for the commercial Bosch IoT Things cloud service, he works for Bosch.IO GmbH, one of the leading members of the Eclipse IoT Working Group.

Steve Millidge explains the many myths and misconceptions that surround serverless and cloud native processes.

Gaël Blondelle sat down to explain why the return of in-person events is such good news for the community, and what there is to look forward to at this year’s event.