To help you get to know the Jakarta MVC specification, here’s a recap of its history and status, and a brief introduction to the technology.

The story of Jakarta MVC started back in 2014 when Java Specification Request (JSR) 371 was proposed in the Java Community Process. The work progressed very well, and the specification became popular in the community as a frequently requested addition to Java EE. When the specification was dropped for Java EE 8, the community took over and released MVC 1.0 as an independent specification in January 2020. After this release, it was transferred to the Eclipse Foundation and renamed to Jakarta MVC.

Jakarta MVC 1.1 was released in September 2020 under the Eclipse Foundation Specification License. Just three months later, in December 2020, Jakarta MVC 2.0 was released with the jakarta.mvc.* namespace and aligned with Jakarta EE 9.

Jakarta MVC 2.0 is the most recent version of the specification, and there are currently two compatible implementations:

In the Model-View-Controller (MVC) design pattern, the controller responds to a request by updating the model and selecting which view to display. The view then retrieves the data to display from the updated model (Figure 1). 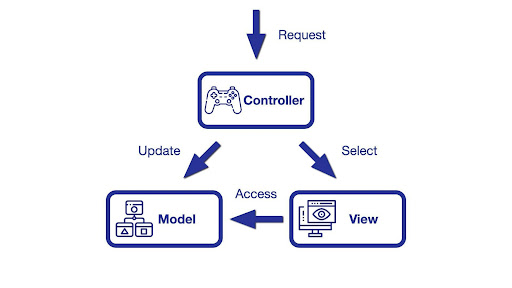 This widely used design pattern can be used in two ways: component based and action based.

Component-based MVC is made popular by component frameworks, such as Jakarta Server Faces. In this style of MVC, the framework provides the controller. This allows application developers to focus on implementing models and views, leaving controller logic to be handled by the framework (Figure 2). 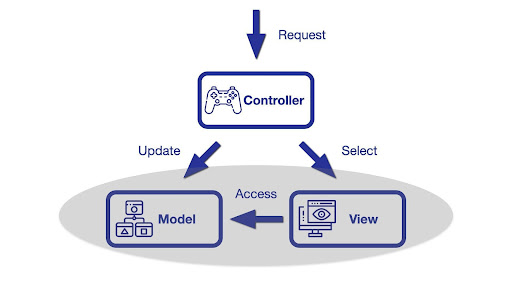 In the action-based style of MVC, the application defines the controller, giving application developers a little more fine-grained control (Figure 3). 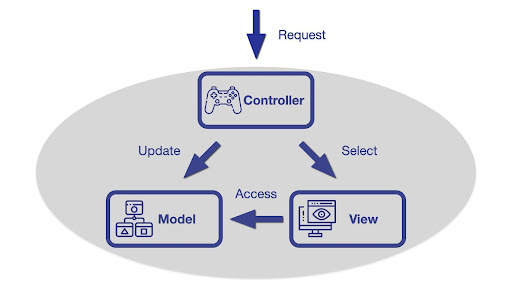 Let’s take a closer look at what you can do with Jakarta MVC.

The @Controller annotation defined by Jakarta MVC marks a resource as the controller. If the annotation is applied to the resource class, all resource methods in the class become controllers.

The annotation can also be applied to a specific resource method. This approach is useful if you want to combine MVC controllers with REST resources in the same class.

There are three ways to define which view a controller should select in a Jakarta MVC application:

The example below illustrates all three approaches.

That’s all there is to the controller in Jakarta MVC. The rest is exactly as you know from Jakarta RESTful Web Services, such as how to handle and validate path parameters, query parameters, and bean parameters.

For the CDI approach, you simply inject the CDI @Named bean into the controller, update it as needed, and return the view, as shown in the example below.

If the view model does not support CDI, or you want to use the provided Models interface for a different reason, you can inject the Models map and update it as shown below.

Views in Jakarta MVC applications are processed by a mechanism called view engines. View engines for Jakarta Server Pages and Facelets must be supported by all implementations, although the requirement to support Facelets is likely to be removed in future versions of Jakarta MVC. Additional view engines can be added using a well-defined CDI extension mechanism.

In Jakarta Server Pages views, the model is available using the Jakarta Expression Language, as shown in the example below.

Jakarta MVC extends the data binding provided by Jakarta RESTful Web Services with support for internationalization and handling of binding errors within the controller. The Jakarta MVC-specific data binding is enabled by adding the @MvcBinding annotation to the relevant field or method parameter. Binding errors are handled in the controller by injecting BindingResult and using it to handle the error before the next view is rendered.

Jakarta MVC provides support to protect applications from Cross-Site Request Forgery (CSRF). To provide this support, the Jakarta MVC implementation generates a CSRF token that is available via the MvcContext object. To verify a request, simply add the @CsrfProtected annotation to the controller, as shown below.

Jakarta MVC specifies a number of events that occur while processing requests. The event mechanism is based on Jakarta Contexts and Dependency Injection (CDI), and can be observed using the @Observer annotation defined by Jakarta CDI.

Learn More About Jakarta MVC and Get Involved

For more insight into Jakarta MVC:

We welcome everyone who would like to get involved in Jakarta MVC. To discover the many different ways you can contribute to the project, click here. Santiago Pericas-Geertsen summarizes the enhancements, clarifications, and two new APIs that are being added to the Jakarta RESTful Web Services specification.