Why You Need Jakarta Concurrency

You need Jakarta Concurrency when programming in Jakarta EE because you have to consider the context information for your application when you move between threads. For example, if you’ve logged into a REST API, then need to create a task on a new thread, you have to retain the security context. To do this in Java SE, you use concurrency primitives: units of code related to concurrency, multithreading, and parallelism.

However, if you spawn a new thread in Java SE, the Jakarta EE runtime is not aware of it, and is unable to establish its security — or classloader, or contexts and dependency injection (CDI), or other — context.

Jakarta Concurrency Use Case 1: Adding an Asynchronous Task to Your Application

Before Jakarta Concurrency, a Java EE developer had to use Java Message Service (JMS) to build an asynchronous task into the application. If an HTTP request coming into a servlet or a REST endpoint needed a long-running action in response, the request information had to be packaged and pushed into a JMS queue using a message-driven bean. This is a heavyweight process.

Jakarta Concurrency makes this much simpler. If you have an HTTP request, you can use the same component you would in Java SE, but in a Jakarta EE version: the Managed Executor Service. You submit a job to it and it runs in a managed thread to replace your long-running action. The thread is managed by the Jakarta EE runtime and the context used in the REST request is applied to the action. As a result, it’s much more lightweight.

The code to do this is shown below. It’s much simpler than the code required when JMS is used. 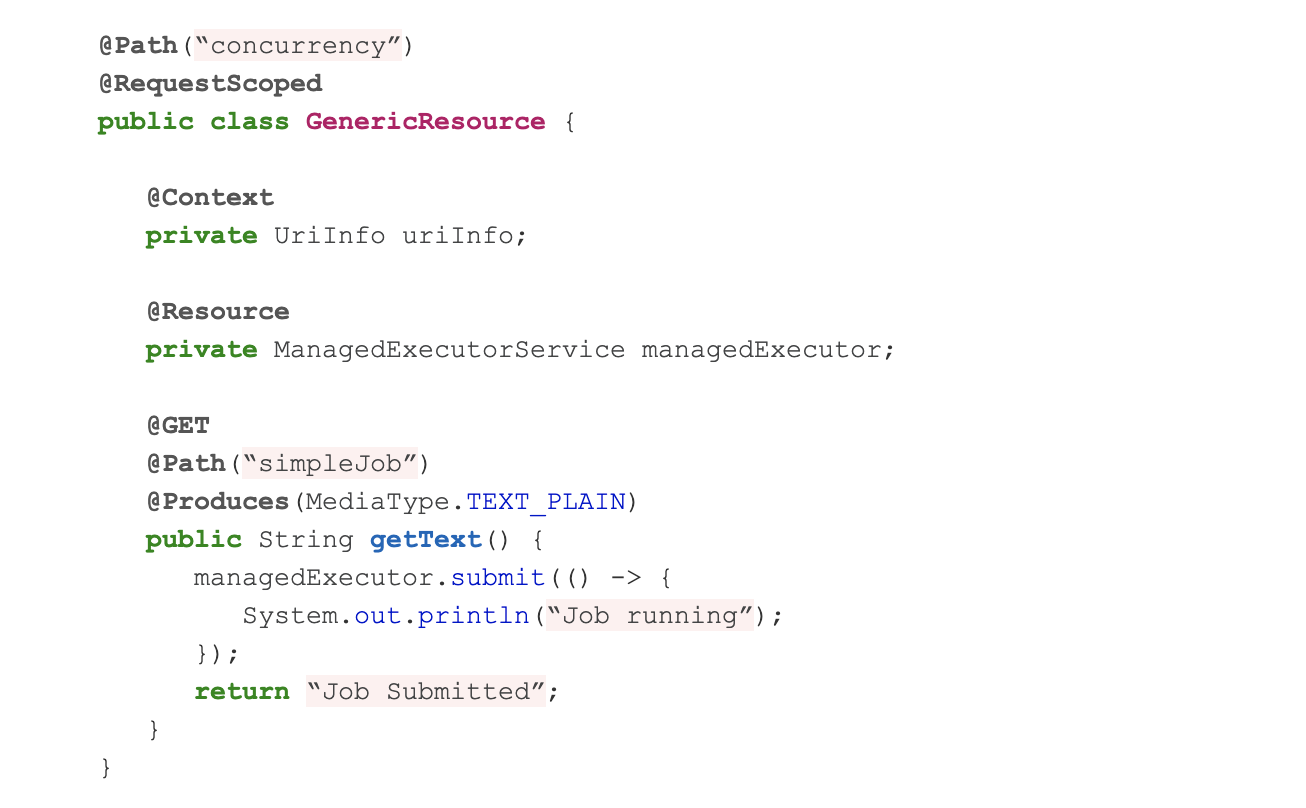 You may have cases where a REST request comes in, you want to run two tasks in parallel, then merge the result, and return it to a user. With Jakarta Concurrency, you can inject the Managed Executor Service into your REST endpoint, then use the Managed Executor API to submit two jobs at once. The method returns immediately and you get back an instance of a Future class. You can get the outcome of the job by calling the get()method, merging it, then returning it to the user.

Previously, this would have been incredibly difficult to do, requiring JMS and the need to create correlation IDs.

With Jakarta Concurrency, the resulting code looks similar to the code below. 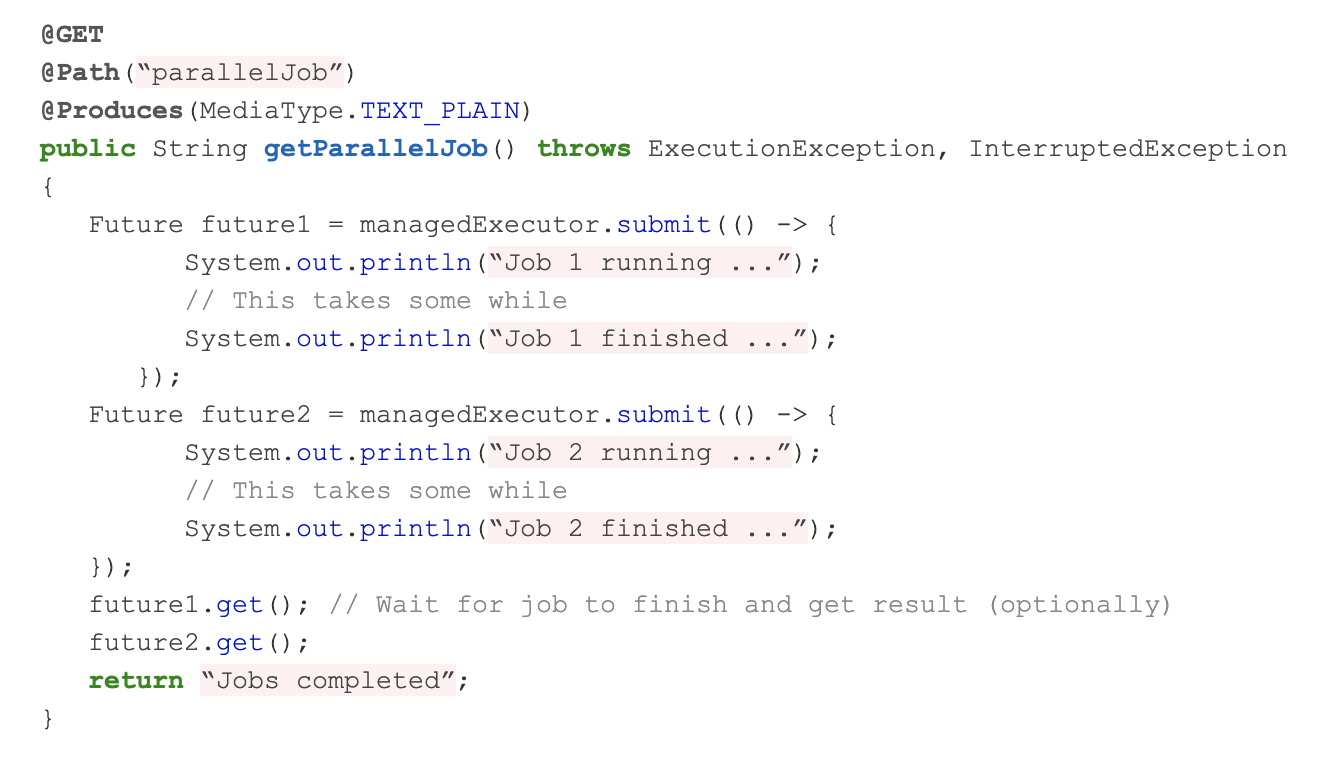 The Main Components in Jakarta Concurrency

To help you understand how Jakarta Concurrency works, here are brief descriptions of the functionality the main components provide:

The Context Service allows you to wrap your Runnable, creating a contextual proxy to submit to any raw thread. It establishes all of the context you expect, so is useful if you’re using an API or library that has no knowledge of Jakarta EE but is spawning threads.

The Jakarta Concurrency specification was first released in 2013 in Java EE 7. In Jakarta EE 9, it was updated to use the Jakarta EE namespace, and in Jakarta EE 9.1, it was made compatible with Java SE 11. The next step is to start making substantial, functional changes to the specification.

Some of the ideas in development, which you can see in GitHub, include:

Currently, all managed objects, other than the default objects, must be created by the application server administrator.

If you have an application that requires fine-grained control of threading, concurrency, and pooling of threads, this feature would allow you to set up these processes without administration consoles.

Currently, there are Jakarta EE annotations to indicate asynchronous execution, but they are unique to each specification. The suggested new annotation could be used with CDI beans.

The ability to specify in the Asynchronous annotation an executor service pool to use enables fine-grained concurrency management when combined with deployable executor services. You could choose different thread pools for different methods, for example.

This new feature could eventually result in a single @Asynchronous annotation that’s common to all Jakarta EE specifications. This would simplify the platform and make it more unified.

Jakarta Concurrency has not yet been updated to align with concurrency primitives added in Java SE 9 and 11. These primitives include standardized support for ForkJoinPool and updated APIs for current Java SE Managed Executor Services.

Get Involved in Jakarta Concurrency

Each specification team must produce:

You can get involved in each and every part of the process. For example, if you’re interested in testing, you could help build tests or maintain the TCK. You can also help with the API, determining which capabilities you’d want as a developer. We also need help updating the specification document in areas ranging from submitting pull requests for typos to higher level input. Steve Millidge is the founder, CEO, and CTO at Payara, and the Jakarta Concurrency project lead.

Ivar Grimstad recaps the history and current status of Jakarta MVC, and provides a brief introduction to the Model-View-Controller technology.

Santiago Pericas-Geertsen summarizes the enhancements, clarifications, and two new APIs that are being added to the Jakarta RESTful Web Services specification.