The Adoptium Working Group is developing the Adoptium Marketplace, a centralized repository for OpenJDK binaries. The Marketplace, which is expected to be available by the end of first quarter (2022), will give enterprises one-stop access to a wide variety of high-quality OpenJDK binaries, and the organizations developing those binaries a mechanism to broaden distribution of their Java runtimes.

Continuing the Work of the AdoptOpenJDK Community

The Adoptium Working Group is building on the work of the AdoptOpenJDK community with the creation of the Marketplace.

When Oracle updated its user license agreement in 2017, requiring paid subscriptions to continue to get updates to old versions of the Oracle JDK, the number of open source JDK binaries proliferated. A number of people started using OpenJDK, the open source repository for Java, and creating their own distributions of binaries. The AdoptOpenJDK project emerged to help people get involved in contributing to OpenJDK and to create community builds and a distribution channel for OpenJDK binaries.

The AdoptOpenJDK initiative proved very successful. Distribution of OpenJDK binaries grew to over 400 million downloads in just four years, and the project was receiving substantial sponsorship. To manage this growth, the AdoptOpenJDK steering committee wanted a more formal environment with a rigorous legal framework, as well as governance processes, developer advocacy, and marketing services, which it got by joining the Eclipse Foundation and becoming Adoptium.

When it’s launched, the Adoptium Marketplace will include OpenJDK binaries developed through the community project, Eclipse Temurin.

Organizations that produce OpenJDK binaries for particular product lines, or provide builds for a broad set of platforms, are invited to join the working group and participate in the Adoptium Marketplace. Because Eclipse Temurin intends to serve the broadest possible range of community members, it includes OpenJDK binaries for Solaris platforms, IBM AIX, and other less mainstream platforms.

Work on the Adoptium Marketplace user interface is still underway and subject to change, but the latest mock-ups provide visibility into the expected layout and approach (Figure 1). Filters allow Marketplace users to easily locate binaries for a specific platform or vendor offering. 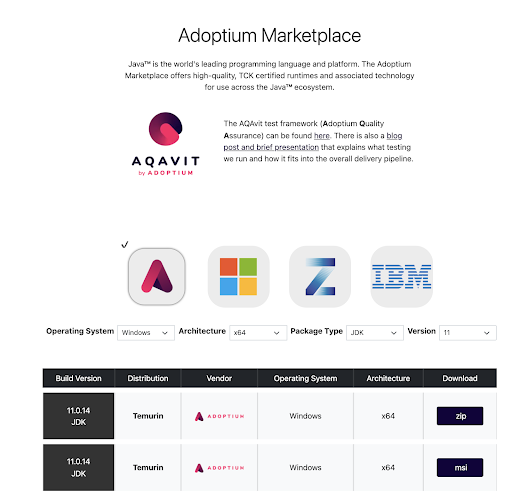 The OpenJDK binaries in the Adoptium Marketplace are updated based on Java’s cadence of two new version releases in March and September, as well as four scheduled updates in January, April, July, and October. After each release and update, binaries must be tested against the quality criteria defined in the Eclipse AQAvit project, which is under the Eclipse Adoptium umbrella.

The Eclipse AQAvit project was created to “make quality certain to happen.” Leveraging the AQAvit test suite to ensure the quality of the binaries listed in the Adoptium Marketplace not only communicates to consumers how serious we are about quality, but also consolidates the good verification practices of the Adoptium Working Group members under a centralized effort. AQAvit aligns its test suite standards with the ever-changing requirements of the user base.

The AQAvit test suite evaluates the Java runtimes for functional correctness, performance, resilience, security, and the ability to pass a wide variety of application test suites (Figure 2). As a result, enterprises can be confident in the OpenJDK binaries they’re bringing into their companies and incorporating into their software supply chains. 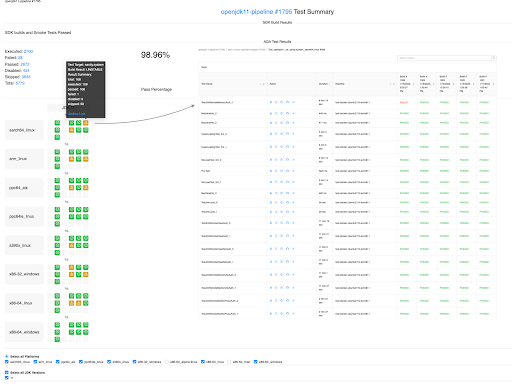 The AQAvit project gets its name from Adoptium Quality Assurance ‘AQA’ and ‘vit’ for vitality and speed. As the project engages with vendors and enterprise consumers, the test suite is continuously expanded and improved to keep pace with the latest Java releases.

There are three basic criteria to have OpenJDK binaries listed in the Adoptium Marketplace:

Providing binaries through the vendor neutral, open source Adoptium community also creates the opportunity for OpenJDK users and OpenJDK developers to communicate and ensure distributions meet the needs of the overall community.

A Growing Community Around OpenJDK Binaries

The members of the Adoptium Working Group collaborate to provide the support the Marketplace needs to grow sustainably, set the agenda for related technologies, and define development strategies.

In addition to Eclipse AQAvit and Eclipse Temurin, the working group nurtures a growing list of projects under the Eclipse Adoptium Top-Level Project.

Get Involved With the Adoptium Community

Once the Adoptium Marketplace is launched, we encourage everyone to explore the available OpenJDK binaries. In the meantime, there are several ways to learn more and get involved: Shelley Lambert is a software engineer at Red Hat and is a project lead on the Eclipse AQAvit project, Eclipse Temurin, and Eclipse Temurin Compliance projects. Additionally, she serves on the PMC and Steering Committee of the Eclipse Adoptium Project. Simon Ritter is the deputy chief technology officer at Azul Systems and has been working with Java technology since JDK 1.0.

Amit Kucheria explains the need for the Oniro OS, the benefits of adopting it, and how you can get involved in evolving this multi-kernel OS for next-gen devices.