The security functionality in Jakarta EE has long been underused and under-specified. The few specifications that existed were often overly complex. As a result, few people used security standards. Java EE 8 changed that with the Java EE Security API specification (JSR 375). Today, that specification has evolved to become Jakarta Security, and it facilitates portable application security integrated with container security.

The story of security in Jakarta EE started with lower-level security in Java SE. Java was originally designed for embedded and IoT usage, such as inside set-top boxes, and it relied on code-based security, which protects the user’s computer by limiting code permissions to only certain files.

These three specifications provide an integrated security solution for Jakarta EE that transparently backs the declarative security model. They provide the functionality that, in early Jakarta EE versions, was provided by the vendor.

Jakarta EE supports a hybrid security model. An application, or its server/runtime, can be configured to use the standard interfaces and associated configuration or interfaces that are specific to a server or runtime (Figure 1).

The options available depend on the implementation being used. For example, Eclipse GlassFish might support different options for security artefacts than other Jakarta EE implementations.

Jakarta Authentication is a general low-level Service Provider Interface (SPI). SPIs are implemented by the user to extend a framework or application. In this case, the Jakarta Security framework. The concept is roughly analogous to a plug-in or extension, a different approach to APIs, which are called by an application.

Jakarta Authentication primarily provides SPIs and very few APIs. The SPIs are low-level, meaning their implementations in Jakarta EE are not beans and are not eligible for injection or for decoration. The Jakarta Authentication SPIs are also general because they don’t refer to a specific Jakarta EE technology, such as Jakarta Servlet or Jakarta RESTful Web Services.

Jakarta Security bridges some of the gaps that were traditionally left unspecified and required vendor-specific solutions. This allows applications to treat authentication mechanisms, such as OAuth or OpenID Connect, the same way as built-in container mechanisms, such as FORM or container-based access to a URL. It also ensures features such as @RolesAllowed and isUserInRole automatically work as expected.

The specification primarily provides easy-to-install and easy-to-use versions of the authentication mechanism and the identity store. The authentication mechanism manages the interactions between a user and a server in a particular environment, such as HTTP. The identity store verifies credentials, such as usernames and passwords, and may also return data associated with those credentials, such as a different username and groups the user is in.

Here’s how all three specifications work together, with a particular emphasis on Jakarta Security (Figure 2). 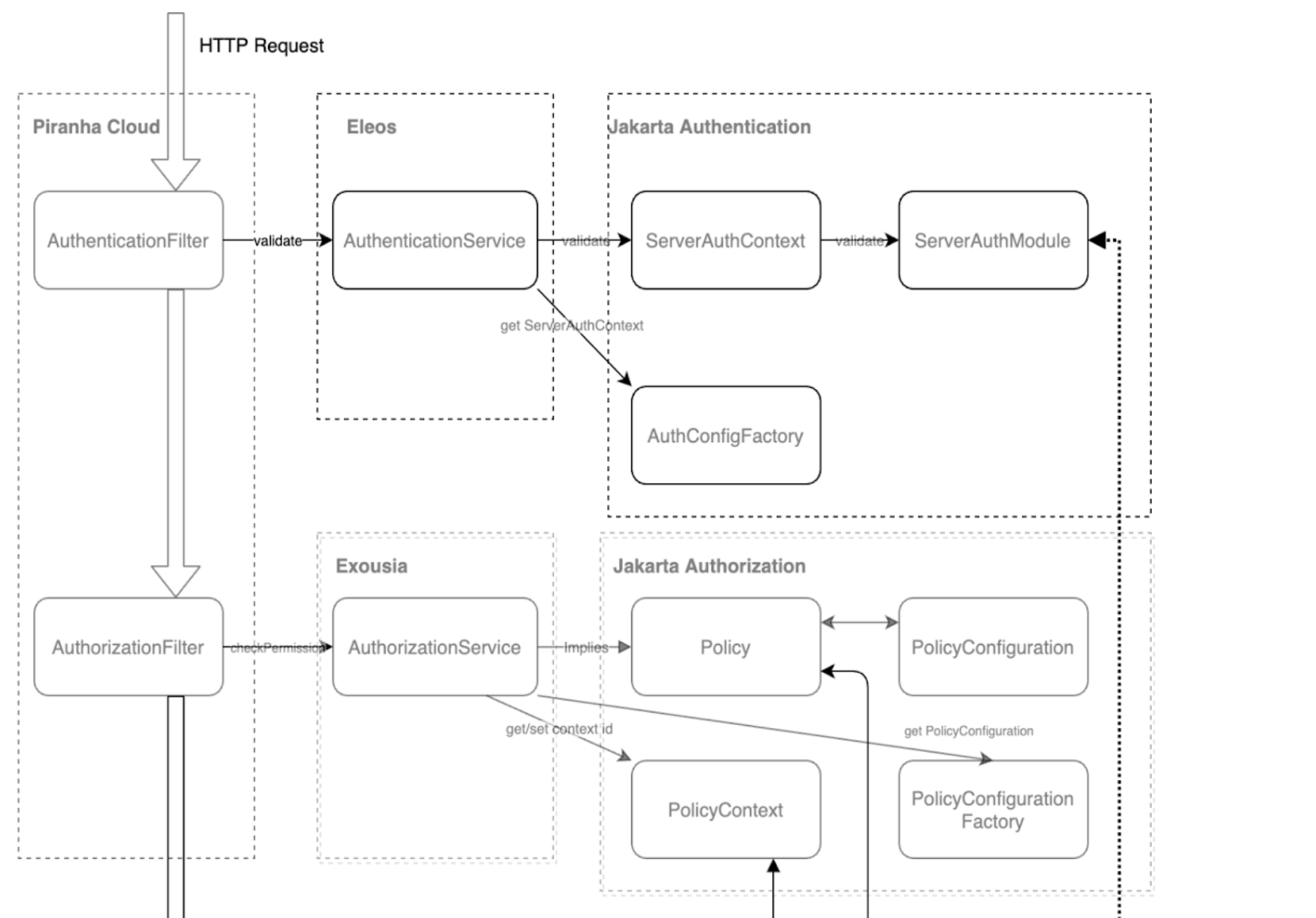 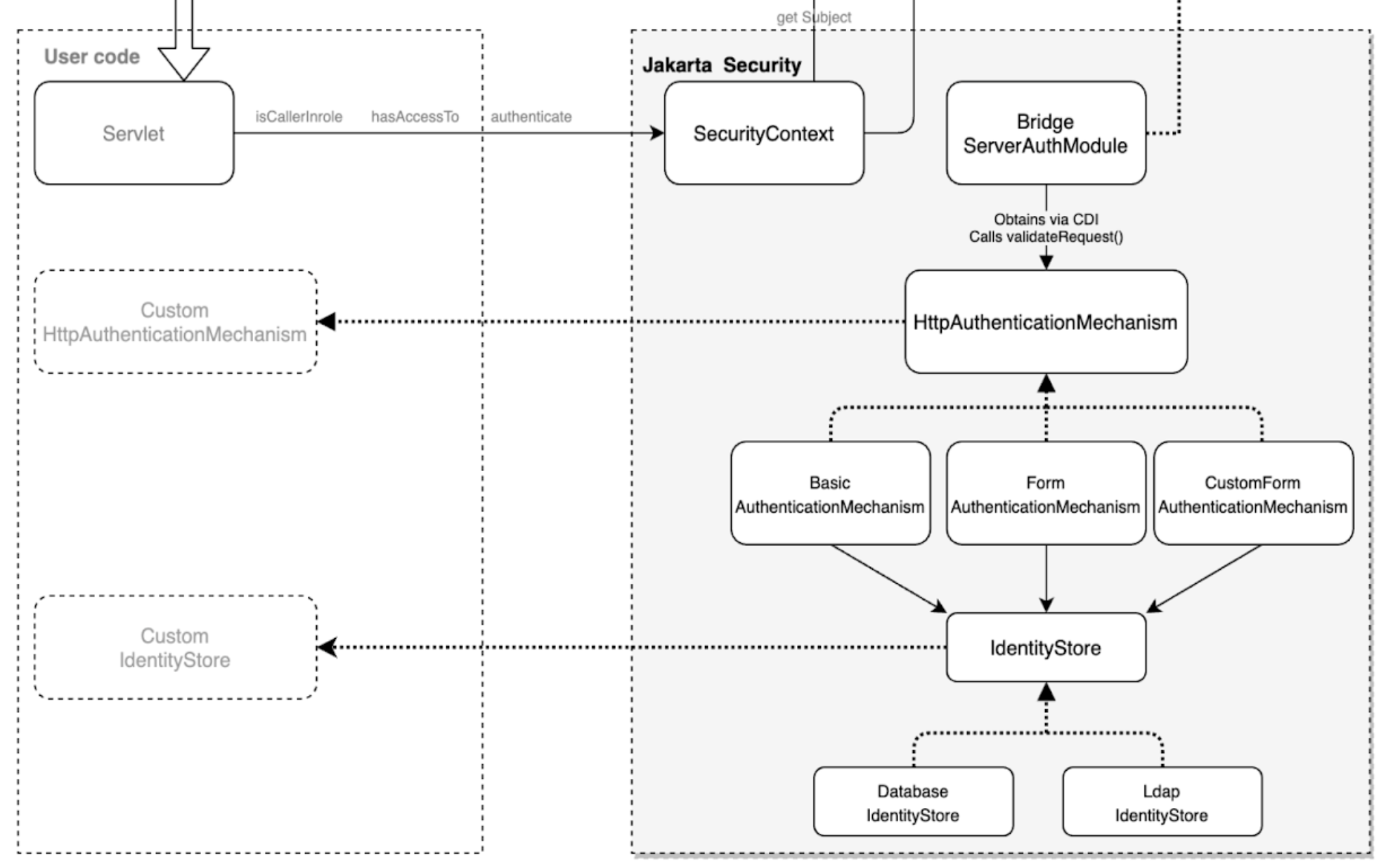 Jakarta EE 10 and Beyond

In the current version of Jakarta Authentication, one cannot distinguish between mandatory authentication because of a call to HttpServletRequest#authenticate or because the current request is protected. Jakarta EE 10 is working to introduce a boolean value to check whether authenticate() was called or not.

It is further anticipated that Jakarta EE 10 or beyond will add default methods to the AuthConfigProvider, avoiding boilerplate-code and allowing to only override/implement the methods you really need. Similar for PolicyConfiguration in Jakarta Authorization.

Additionally, it is considered to add a convenience mechanism to simplify CDI integration, like a @RolesAllowed alternative. Better alignment between Jakarta Security and Expression Language is also considered.

Get Involved in Jakarta Security Projects

We encourage everyone to get involved and participate in the future of Jakarta EE security projects at the Eclipse Foundation. To get started, subscribe to the project mailing lists and visit the GitHub pages:

For more insight into Jakarta EE, you can also visit jakarta.ee, Arjan Tijms’ committer profile, or his blog. Arjan is a committer to more than 20 Eclipse Enterprise for Java (EE4J) specifications and a project lead for the Jakarta Security specifications and others. He is the co-creator of the popular OmniFaces library for JSF that won the Duke’s Choice Award in 2015, and the author of two books: The Definitive Guide to JSF and Pro CDI 2 in Java EE 8. Werner is a committer at the Eclipse Foundation and the Apache Foundation as well as being a Babel Language Champion, an Eclipse UOMo project lead, and an active member of the Java Community Process. Werner is currently the community representative in the Jakarta EE Specification Committee, was among the first five Jakarta EE Ambassadors when it was founded as Java EE Guardians, and is a member of its Leadership Council.

Updates to the two specifications for processing JSON documents relax some of the existing restrictions and make it easier to use the specifications.

The newest version of the Jakarta Persistence specification features quality-of-life improvements and many new features, especially for the Query Language and the Criteria API.