Pierre Audoin Consultants has recognized Bosch.IO and Eurotech as "leading vendors" in their recent “PAC RADAR” report for the Internet of Things. The authors compare service providers based on 50 predefined criteria. These parameters include turnover, development and market position of the providers, as well as performance and competencies within specific market segments.

The report, entitled Open Digital Platforms for the Industrial World in Europe 2021, also notes that the Eclipse IoT Working Group is the leading open source community in IoT today.
The report highlights the following examples of commercial products that are based on Eclipse IoT projects:

It is worth mentioning that many of the projects listed above received the contributions and support of Red Hat, a pioneer of open source software and strategic member of the Eclipse IoT working group.

These examples confirm the open source software projects hosted at Eclipse IoT provide strong foundations for commercial offerings and are important to the development strategies of leading IoT solution vendors and their customers.

Both Eurotech and Bosch.IO are part of the Eclipse IoT Working Group at the Eclipse Foundation, Europe's largest open source organization. Bosch.IO, the Bosch Group’s expert team for IoT and digital business, manages more than 15 million IoT devices (including sensors and machines) through its open source-based IoT software.

Specializing in edge computing and IoT, Eurotech is able to offer hardware and software building blocks for a variety of vertical markets, ranging from rugged IoT Gateways up to edge servers and very compact high performance Edge AI systems. Eurotech`s value proposition does include a strong offering in IoT software, based on enterprise-ready open source software, contributed and developed in the Eclipse IoT Working Group.

Bosch.IO and Eurotech named the only “best in class” providers of open source IoT platforms for 2021

The research report concludes that Bosch.IO and Eurotech have a leading position in the open source-based IoT platforms market segment. This strong positioning comes from the companies’ commitments to innovation within the IoT partner ecosystem as well as their expertise in many vertical markets. 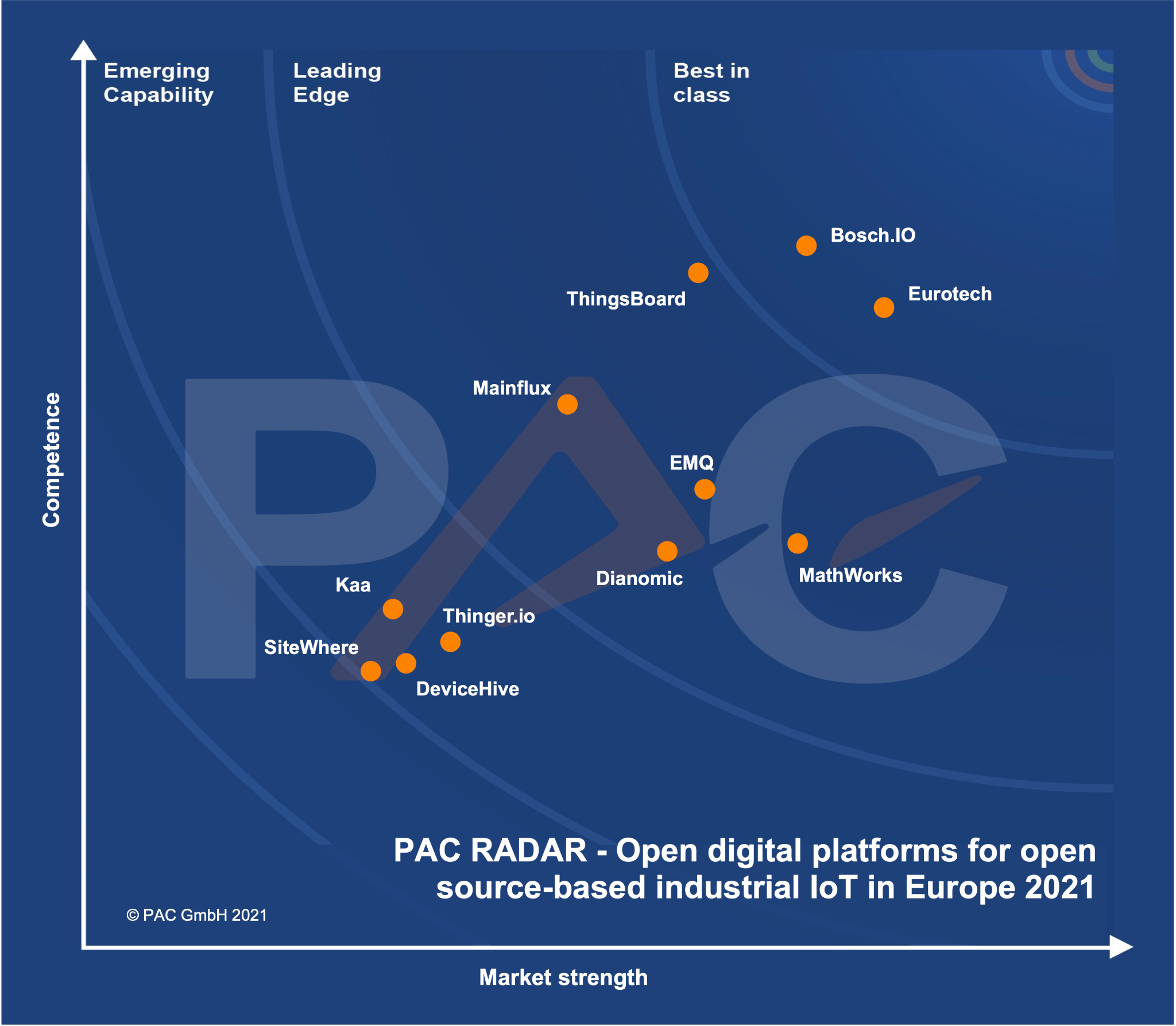 "From our point of view, the Eclipse Foundation’s IoT Working Group is undoubtedly the leading open source IoT community," says Arnold Vogt, Lead IoT and Digital Transformation Analyst ,Pierre Audoin Consultants. "It's no surprise to us that our two best-in-class vendors are part of that community."

The Eclipse Foundation's IoT Working Group, which celebrates its tenth anniversary this year, drives more than 45 open source IoT projects. Its strategic members, Bosch, Eurotech and Red Hat collaborate on many of those projects. Developers interested in evaluating them should have a look at the Eclipse IoT Packages project, an effort led by Red Hat contributors to simplify the deployment of pre-configured Eclipse IoT components on Kubernetes.

To find out more, you can download the Open Digital Platforms for the Industrial World in Europe 2021 report.

"Bosch.IO is strongly committed to enterprise-ready open source software as a solid component for successful IoT rollout and digital transformation implementations. The core of Bosch IoT Suite is built utilizing Eclipse IoT projects. This has allowed us to strategically position our key offerings to our partner ecosystems and minimized risks and potential vendor lock-in for our customers," emphasizes Dr. Andreas Nauerz, Chief Product Owner Bosch IoT Suite at Bosch.IO.

“In a high-technology environment that moves and evolves quickly, open, collaborative approaches and architectures are essential. When it comes to digital transformation and IoT, especially in the context of the industrial, operational technology world, customers and partners benefit from an ecosystem approach, with open standards and open source as core elements. At Eurotech, our software stack for IoT & edge computing is based entirely on open source. This would not have been possible without the Eclipse Foundation IoT Working Group, which we are proudly a founding and committed member of " confirms Robert Andres, Chief Strategy Officer at Eurotech.

“The Eclipse IoT working group spearheads numerous projects that have become cornerstones of valuable commercial products. These projects exemplify how an open source approach is an integral part of developing leading IoT solutions. As an advocate for the open source way, Red Hat is proud to be a member of the Eclipse IoT Working Group and contribute to projects that pave the way for open source innovation.” Says Deb Bryant, Senior Director, Open Source Program Office, Red Hat.